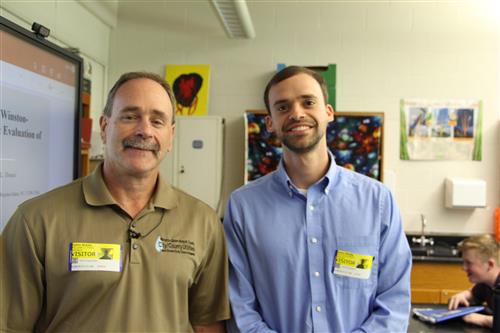 Following Water from the Yadkin River to the School Drinking Fountain

MAY 2, 2019 – At Hanes Magnet Middle, students learned how drinking water makes its way from the Yadkin River or Salem Lake to the drinking fountains in their school and how safe it is when they drink it.

Quite safe, they learned.

Along the way, they learned a number of fun facts.

For the $1 that someone spends on a bottle of water, the Winston-Salem/Forsyth County Utilities Commission could provide them with more than 500 gallons of water.

The second water system in the United States was established in what is now Old Salem in the 1780s.

If you want to have elementary students clap for you, opening a fire hydrant is a sure-fire way to get an enthusiastic response.

It was all part of a presentation that Bill Brewer, the Water Treatment Superintendent, and Jake Carter, who is working on a doctorate at Wake Forest University, made to a number of Hanes classes on Monday and Tuesday. As part of his research, Carter tested the water at all of the schools in the Winston-Salem/Forsyth County school system.

Having Carter and Brewer make presentations to students was also an excellent educational opportunity, Loflin said. “We thought it would be a positive experience for students, especially for those on the path to science.”

David DeLade, the school system’s Director of K-12 Science, was glad students were able to hear the presentations.

“We were fortunate that the teachers were flexible in allowing the program to come into the classrooms during the final push towards exams,” DeLade said.

“The program aligns to our eighth-grade hydrosphere unit and our high school Earth Environmental science unit. Having Wake Forest University and the City of Winston-Salem present allows the students to look beyond the scope of school and into current situations with water quality.”

“Our standards allow students the exposure of becoming stewards of the environment. As our students are the future stewards, having Wake Forest University present water quality data collected from our district schools adds the extra layer of reality and shows how collecting data samples and communicating science are important avenues that our students may face in certain careers.”

On Tuesday morning, Brewer and Carter started their day at Hanes by speaking to the eighth-graders in Jacob Lamie’s science class.

Brewer, who graduated from Reynolds High in 1984, oversees the three plants in the county that process fresh water. Brewer began with a bit of history by asking students what city they thought might have had the first water system in the United States. After a couple of guesses, a student correctly identified Philadelphia.

“Philadelphia has the oldest water system,” Brewer said. “Salem had the second oldest.”

Early on, Salem used wooden pipes. After George Washington visited Salem in 1791, he wrote a letter of commendation to the community for what they had done.

Brewer then proceeded to take everyone through the process of how water is treated after it is taken from the Yadkin River or Salem Lake.  An interesting side note was that the top 30 feet of the water behind the Kerr Scott Dam belongs to the utility commission because, when the dam was being built, it paid to have the dam made 30 feet higher so it would have access to the water should issues ever arise with the Yadkin River or Salem Lake.

Water is processed at three plants in Forsyth County. One is in the Pfafftown area. One is near Clemmons, and one is near Winston-Salem State University. 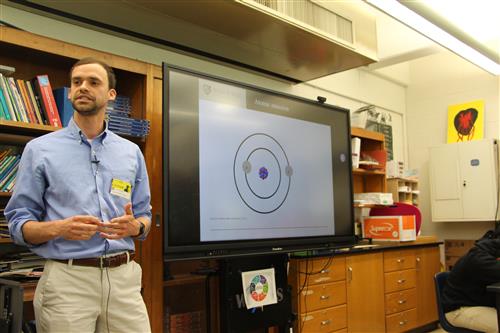 Initially, the water goes through screens that remove larger debris, such as logs and sticks. No bodies have been found so far, Brewer said when someone jokingly asked whether one had ever been caught in the filters.

After that, aluminum sulfate is added. It serves to make small particles coagulate and drift to the bottom as sediment, which is then removed. The water is then filtered through filters that include sand and bits of anthracite coal.

Such chemicals as chlorine and fluoride are added, and the water is pumped to towers that not only serve to store the water but to provide pressure so that the water comes out of everyone’s taps and to provide large reserves of water should it ever be needed to fight a fire.

It’s possible for small amounts of such undesirable elements as lead to make it through the treatment process, and, for his project, Carter did research into the levels of such elements that could be found in water in schools.

To help students understand the process, he began by talking about such topics as atoms, ionization, parts per million and parts per billion, and the elements on the Periodic Table.

To help students visualize parts per billion he suggested imagining one sheet of toilet paper on a roll of toilet paper stretched from New York City to London. Later, he offered other useful analogies. One part per billions is equivalent to 1 second in about 32 years or a pinch of salt in a 10-ton bag of potato chips.

One element to be wary of in water is lead, which, until the mid-1980s, was sometimes used in pipes. As water traveled through the pipe, lead could leach into the drinking water.

As student Ethan Madren pointed out, the residents of Flint, Mich., are only too aware of the health problems lead can cause.

For his research, Carter sampled the water at 76 Winston-Salem/Forsyth Schools, starting in the fall of 2016 and finishing up in the spring of 2017. For consistency, he checked it at two places – in a cafeteria sink and in the water fountain nearest the main office. At some schools, he would check the water from a fire hydrant to see what the water was like before it entered the school.

At one elementary school, students clapped when he opened a fire hydrant.

“It was the only time in my life when I got applause from my science career,” he said.

When all his research was done, the news was good.

At no school was the level of any unwanted elements higher than the maximum acceptable level set by the Environmental Protection Agency.

These days, Carter, who is from Wilson, is focusing on his dissertation.

“The full title is ‘Bridging the gap between chemical analysis and applied statistics to expand the applications of atomic spectrometric techniques,’” he said. “My goal is to defend this dissertation during the summer of 2020.”

“As someone who has lived in North Carolina their whole life, research like this is personally meaningful,” Carter said.

“I doubt any other work I will complete at Wake Forest University will have as an immediate and beneficial impact as helping to ensure drinking water safety for school children in Winston-Salem/Forsyth County Schools.”

“This project was the outcome of a healthy collaboration between academia, public school administrators, and industry experts. I think that is something to be modeled with upcoming state legislation mandating testing drinking water within North Carolina school buildings.”