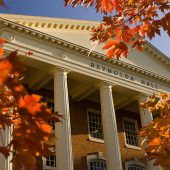 Wake Forest College was founded in 1834 on a plantation located in northern Wake county by the Baptist State Convention of North Carolina. The 617 acres were located in an area known as the Forest of Wake because of its abundant hardwoods.

In the years before the Civil War, the College continually had to deal with financial problems created in part by low enrollment. A short period of growth and expansion ended with the onset of the Civil War at which time the College closed its doors.

The school was re-opened in 1866 and prospered over the next four decades. Endowments increased and the number of faculty doubled, academic departments grew from eight to thirteen, enrollment rose, three buildings were constructed, and law and medical schools were begun. During this period the appearance of the campus was greatly improved with the plantings of hundreds of trees and the building of a stone wall on its perimeter. Intercollegiate sports were also introduced. 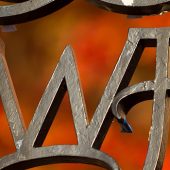 When the College celebrated its centennial in 1934, there were forty-one faculty members. The senior class numbered forty, including one woman. Sixty-two medical students were enrolled, and sixty-seven students were in the law school. Enrollment dropped during World War II as students left to join the war effort. To supplement the loss of enrollment, the College changed its admission policy in 1942 and for the first time began admitting women on a full-time basis, a change that altered campus life dramatically.

In 1956 the College was relocated in Winston-Salem, where the medical school had located five years earlier. Between 1952 and 1956 the first 14 buildings were erected, in Georgian style architecture, on the new Winston-Salem campus. In 1956 the College moved all operations, leaving the 122-year-old campus in the town of Wake Forest to the Southeastern Baptist Theological Seminary. 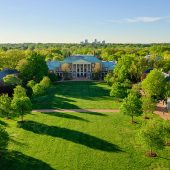 The college ended segregation in 1961 and now has about 14 percent minority undergraduate enrollment. Although the official governing relationship with the Baptist State Convention ended in the mid-1980s, the University’s Baptist heritage remains important and is reflected in traditions, scholarships and programs. 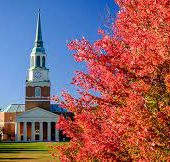 Wake Forest gained international attention in 1988 and again in 2000 by hosting Presidential Debates in Wait Chapel. Since becoming one of the first schools to issue laptop computers to all students in 1996, Wake Forest has been annually recognized as one of the most wired schools in the country.

Practice sharing your "Pitch" with others: A partnership event with GSA

What is GRD 717: Career Planning for Graduate Students?